GrabCAD Print is one of the company’s new software tools that will allow for production-scale manufacturing of parts. 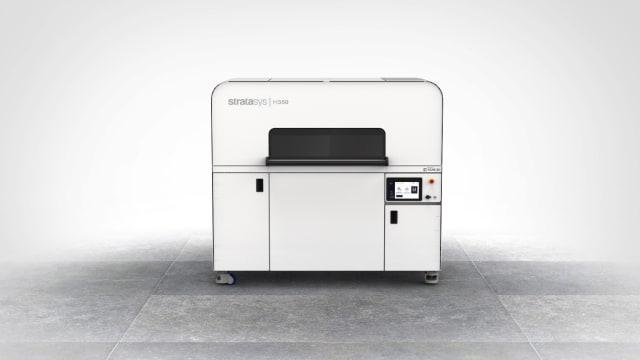 Stratasys announced new software tools to enable more use of their SAF technology in manufacturing.

In SAF a fast-moving arm quickly deposits droplets of “HAF” on the portions of the layer that are to be fused. HAF is a specialized fluid designed to rapidly heat up when exposed to specific light frequencies.

After the fluid deposition, a powerful infrared light sweeps over the layer, causing the wet portions to heat up and fuse. While the other powder is also heated, it’s not sufficient to cause fusion to occur, and these particles remain loose.

The process repeats, layer-by-layer until the object is complete, whereupon it must be dug out of a build chamber filled with loose powder.

SAF has not only the major advantage of powder printing, the lack of requirement for any support structures, but it’s also very fast as each layer can be produced quite quickly with the rapid deposition and heating steps.

Stratasys has implemented SAF in one device thus far, the H350 3D printer.

Specifically, they have announced “GrabCAD Print” for the H350, and they say it is built on their recently introduced GrabCAD Additive Manufacturing Platform.

“GrabCAD Print for the H350 ensures that the end-to-end workflow from digital design to physical part across the manufacturing enterprise is easy, accessible, affordable and connected. The software has been upgraded to provide advanced print capabilities that give users the ability to stack and nest parts automatically or manually to maximize packing density and print hundreds to thousands of parts in a single build volume. Further, because the application is built on the GrabCAD Additive Manufacturing Platform, Stratasys H350 users have access to additional core applications like GrabCAD Print Mobile, GrabCAD Shop, reporting and analytics, and machine connectivity which will allow them to easily integrate their H350 with enterprise systems and Software Partner solutions.”

This is a key step for Stratasys as it now positions their H350 — and by implication SAF itself — as a fully capable production option. Manufacturers considering SAF may now be assured they will have the necessary software to operate the device, in addition to the hardware and materials.