Leading Chinese automotive component supplier Yangfeng Visteon has increased its investment in Delcam software for its mouldmaking operations in Shanghai.

BIRMINGHAM, UK, May 17, 2005 - Leading Chinese automotive component supplier Yangfeng Visteon has increased its investment in Delcam software for its mouldmaking operations in Shanghai. This latest order follows the purchase by the company of additional high-specification 3-axis and 5-axis machine tools to further expand its toolmaking capacity. 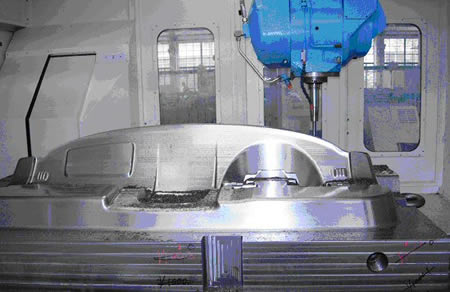 Yanfeng Visteon Automotive Trim Systems Co., Ltd. is a joint venture company of Shanghai Automotive Industry Corporation, one of China’s largest automotive manufacturers, and Visteon International Holdings Corporation, a leading automotive component manufacturer with approximately 70,000 staff based at more than 200 technical, manufacturing, sales and service facilities located in 25 countries. Since the joint venture was established ten years ago, it has become the most important supplier of spare parts for cars and trucks within China, with its customers including practically every Chinese automobile company.

In the early years of the joint venture, Yanfeng Visteon sourced its moulds from a number of domestic and international suppliers. However, with increasing pressure for improved quality and a need to meet stricter delivery times, the company decided later to bring both the design and manufacture of its moulds in-house. Subsequently, the mould department has also become a supplier to other manufacturers, including international corporations such as Toyota.

In 2002, Yanfeng Visteon purchased a number of new 3-axis machines, which prompted a review of its CADCAM system. The key aspects of the review were ease of use, reliability and calculation speed. The results prompted the purchase of two seats of PowerMILL, to replace the machining software the company had used for the previous five years. The success of this initial installation lead to further orders for PowerMILL during 2003, and to the introduction of PS-Moldmaker for mould design and PS-Electrode for electrode manufacture.

The Manager of the Mould Department, Mr. Liang said, “PowerMILL provides us with some very efficient safety features, such as tool holder collision verification and machine simulation. Together with the rapid calculation speed and the software’s ease of use, the avoidance of collisions since we began using PowerMILL has allowed us to optimise the use of our machine tools.” He added, “The support we received from Delcam China made the initial transition to PowerMILL very fast and free of problems. Since then, the staff have continued to help us improve our mouldmaking processes with the software and to keep up with developments in advanced machining technology.”