General Motors Co. says its 2011 Chevrolet Cruze Eco, set to debut Wednesday (2010-3-31) at the New York auto show, gets 40 mpg on the highway due to a GM first: a lower front fascia with shutters. 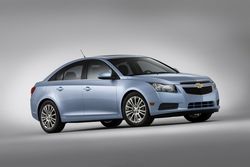 The Cruze Eco, GM's effort to create a high-mpg car without stripping it of appealing features, closes the shutters automatically at highway speeds to improve aerodynamics and fuel economy.

The Cruze Eco has power windows, power locks and air conditioning. Rather than cutting content to reduce weight, Chevy relied on aerodynamic improvements, an axle ratio that optimizes fuel economy and low-rolling-resistance tires. The car has a six-speed manual transmission.

"We looked at every single possibility of squeezing out the last tenth of a mile per gallon," said Mike Danowski, Cruze product manager. An electric motor is connected to the fascia shutters, which close automatically at 37 mph and reopen at 34 mph. When closed, there is a 0.016 improvement in the coefficient of drag, he said.

The Cruze Eco's fuel economy is expected to be about 2 mpg higher than non-Eco models.

One of those models, the sporty Cruze RS, also debuts this week in New York. The optional package includes sporty fascias and a rear spoiler. A special instrument cluster has chrome accent rings and bezels that let blue backlighting shine through.

Sony to Realign its LCD TV Manufacturing Operations for Europe