AWE 2021, recently concluded, is the one place to see all the latest and most futuristic visualization technology—visualization of the sort we imagined the future would hold, in living color and in 3D—not the 2D screen you are looking at right now.

AWE is back after a pandemic induced hiatus and is full of technology for XR (XR = AR + VR + MR). XR is more sensory than ever, and more than just visual as companies add smell and touch to the XR experience. 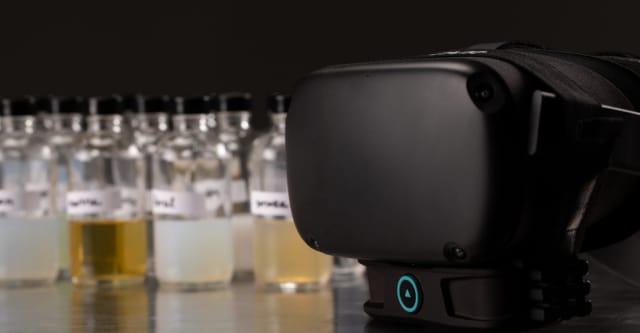 OVR Technology was offering to add scent to your XR experience. OVR is short for olfactory virtual reality. This is no mere Scratch ‘n Sniff card—OVR delivers a microdose of scent from an attachment on your headset.

OVR does this with its Architecture of Scent system with “scentware” and hardware it calls ION, “a lightweight wireless device that precisely emits scent particles to the user in coordination with virtual reality technology designed to deepen the immersive experience.”

The sense of smell is the only sense that connects directly to the brain’s limbic system, says OVR’s CEO and founder, Aaron Wisniewski. As such, scent is the most direct route to realism. Wisniewski bills himself as an olfactory evangelist, mad scientist and the “Indiana Jones of Scent.” With an associate’s degree from the renowned Culinary Institute of America, it makes sense: 80 percent of taste is actually smell. No one was talking about adding taste to the XR experience so OVR, with its scent technology, will have to do. 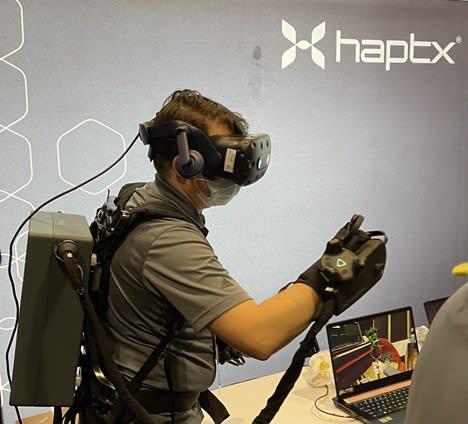 Touchy feely. Haptx adds sophisticated haptics to a glove to duplicate the sense of touch in a XR experience.

Haptic feedback is the partial synthesis of our sense of touch by providing one physical response you encounter when you touch an object: the seeming push back. Our sense of touch involves more than a force applied normally to a surface. There is also a force parallel to the surface (stickiness) and multiple other sensations involved in a full tactile sensation (pain, heat or cold, ticklishness, etc.) that haptics do not provide, but let’s play along. Apple nailed haptic feedback with the home button on earlier iPhones, which gave the sensation of a button depressed even though no displacement took place.

Attempting a more sophisticated touch experience is Haptx. With 133 points of feedback, its haptic glove (gauntlet?) surpasses the haptic feedback of current gloves or devices on the market. 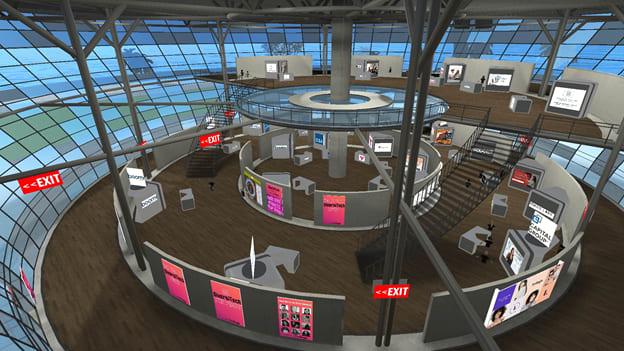 AWE has come back into the physical world, but the vast majority of events remain virtual. The initial euphoria of the ease and low cost of a virtual event have given way to a big question: are attendees paying attention? Wonder no more with Agora World. This company not only promises to put your show, art gallery, corporate events, etc. online, it will measure your attendees’ attention.

Agora is Greek for open spaces and therefore, symbolic of the company’s virtual open space. Agora VR is using the latest Vive VR untethered headset but will work with the tethered one as well, says Hermes Frangoudis, developer evangelist at Agora. 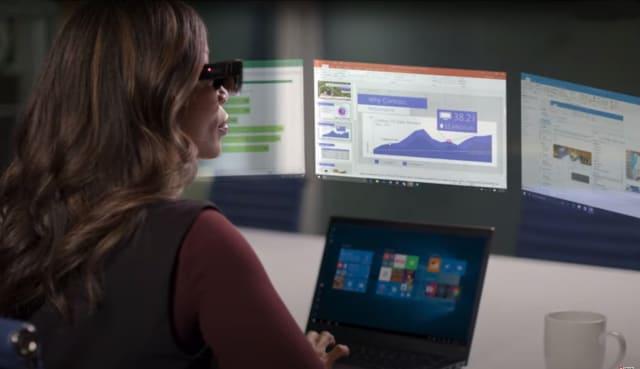 You can take them with you—if they are virtual. Lenovo's ThinkReality A3 headset provides a virtual set of monitors that float above your ThinkPad. (Picture courtesy of Lenovo)

Of the myriad ways that XR was to have dramatically changed our lives, Lenovo’s way may be the most pragmatic. Their ThinkReality A3 headset simulates multiple large screen monitors. The virtual screens take the place of the big screens you left behind in the office because you are traveling or working from home. You only have to pack your ThinkReality A3 smart glasses.

At a fraction of the mass and space multiple monitors require, you have the image of them right in front of your eyes. Although the resolution and the angle of view is typical of XR headsets, you can see the entire expanse of screen space from your set of virtual monitors by moving your head, the same as you would do with a multiple monitor set (or if you are lucky, your ultrawide curved screen) in the office. 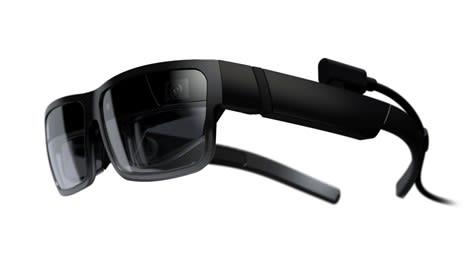 The A3 headset is priced at $1,500, so it isn’t a money-saving alternative to a pair of high-resolution monitors. (Dell’s 34” 4K monitor was available for $250 on Cyber Monday). However, we think Lenovo will be able to sell these for cutting-edge-technology-at-any-cost geeks and tech execs who would rather throw a headset in their Tumis to get the multiple screens in their rooms at the Hilton. Lenovo is also marketing the A3 to anyone wary of “shoulder surfers” that will see what you have on your laptop screen. No, not that; we were thinking of your company’s trade secrets or classified documents.

The A3 is a bit bulky (compared to ordinary glasses) so we expect its use to be limited to a couple of hours at a time.

The A3 is compatible only with certain ThinkPad mobile workstations (P series). You can also hook it up to one smartphone. It’s not the smartphone you have, but the Moto g100. Heard of it?

All Around the Campfire 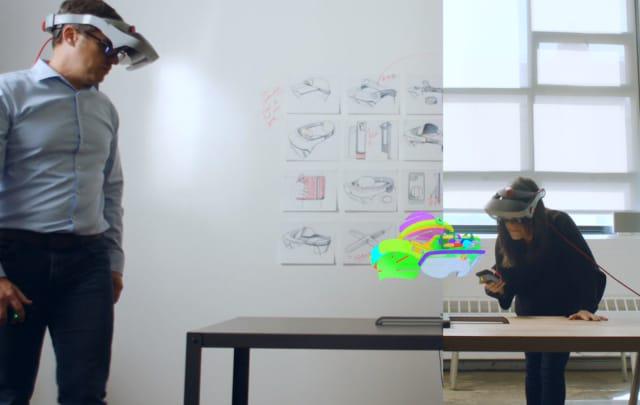 Jay Wright (left) co-founder and CEO of Campfire shows the Campfire system, interacting with a hologram and a collaborator in a different location. (Picture from Campfire video.)

Campfire chose AWE for the first public showing of their AR headset. The headset is an original design that addresses what CEO and co-founder Jay Wright calls the #1 problem with all existing headsets: a limited field of view. 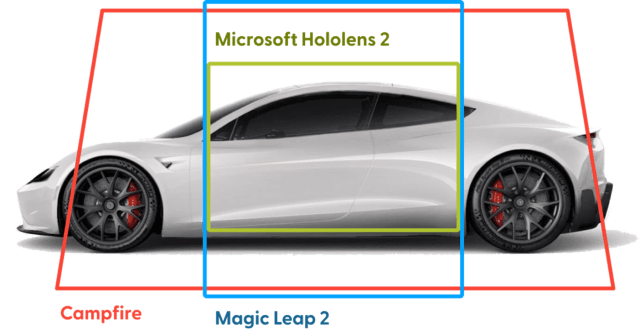 Without moving your head, you can see a 92° field of view with the Campfire headset, surpassing the field of view of Microsoft’s HoloLens and the Magic Leap 2. (Picture courtesy of Campfire.)

It was at AWE 2016 that Wright, then with PTC, predicted that Vuforia was going to change the way we work. Vuforia was targeting designers and engineers, so we paid attention. PTC had scooped up Vuforia from Qualcomm for $65 million in 2015. Wright was to leave PTC within three years and co-founded Campfire in 2019. The company hoped to release the product in Q1 of 2020, according to COO and co-founder Roy Ashok.

Wright brings a beginner’s enthusiasm to the hardware side of AR. In an industry that is already awash in headsets, he is selling yet another. He is selling it on the basis of greater field of view, a nicely detailed hologram, comfort (“you probably will not throw up”) and all-day wearability.

Indeed, it does fit comfortably on the head, and the image (a jet turbine engine) was sufficiently detailed. But the headset is still bulky and in reality, may take some getting used to for full-time use.

Campfire is more than a headset. It is a whole display system of hardware and software. A console that looks like a stand is the holographic image projector, and a pack is the device that clips onto an iPhone and fires a beam (only visible with the headset) that points to the hologram. The controls to the hologram are shown on the iPhone screen.

The Smaller the Wave Guide Display…

Smart glasses can be lightweight and all-day wearable—but at the cost of functions. Solos smart glasses, shown here, appear to only have motion sensors and speakers. They connect wirelessly to a smart phone. (Picture courtesy of Solos video.)

With all AR and VR headsets too heavy and too bulky, the rush is on to make their functionality available on a much smaller device. This is the promise of smart glasses, a term that implies they are the same size as regular eyeglasses, but smarter. Except the smarter they get, the bulkier and heavier they get.

At one end of the spectrum are smart glasses that are light and small and do little to justify being called smart. At the other end of the spectrum are the heavy, bulky XR headsets. But to fulfill the promise of augmented and virtual reality requires a computer strapped to your head and dangling monitors over both eyes. Clearly, a miracle in miniaturization is in order.

One company providing a path to miniaturization, at least on the visualization side, was Dispelix, with what they claim is the thinnest possible waveguide display. 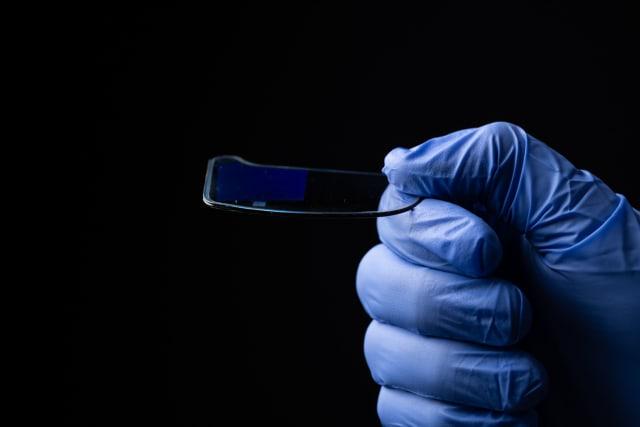 You can't be too thin. A Dispelix waveguide lens is 1mm thin. (Picture courtesy of Dispelix.)

While the innards of an XR headset may be a mystery to most gamers using them, engineers know the waveguide in a headset functions as an optic nerve in reverse, channeling light from the head-mounted CPU to the specialized lens that will display the image. Here, the lighter and thinner the lens, the more comfortable the smart glasses.

The lenses Dispelix was showing at AWE 2021 were as thin as 1mm. Indeed, it was hard to tell the smart glasses on display from ordinary prescription glasses.